FOSS4G is the acronym for Free and Open Source Software for Geospatial. It is the annual recurring global event hosted by OSGeo since it's inception in 2006. Its predecessors were rooted in the GRASS and MapServer communities and can be traced back to the beginning of this millennium. Find all recent conference web sites under the year followed by foss4g.org as in http://2011.foss4g.org/

History of the Acronym

The FOSS4G was first coined in early 2004 as an acronym for Free and Open Source Software for Geoinformatics by a research group working on I18N of GRASS and MapServer. The first publication defining and using the FOSS4G acronym was published in Japan in March 2004 in a paper entitled "Development of training material and internationalization of GRASS GIS and MapServer for advancing FOSS4G solutions" published in the Bulletin of Osaka City University Media Center(ISSN: 1345-4145). It was later used at the Free/Libre and Open Source Software for Geoinformatics: GIS-GRASS Users Conference held between September 12 - 14, 2004 in Bangkok, Thailand in a publication entitled Implementation of Web Map Server Test-bed and Development of Training Material for Advancing FOSS4G Solutions and subsequently in several other international and national conferences and meetings. 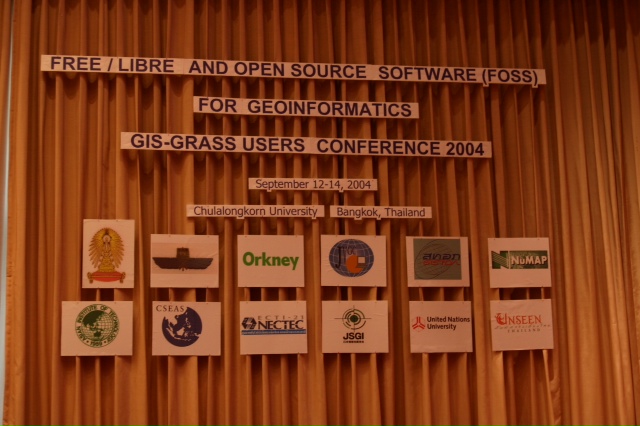 The foss4g.org (and grass-japan.org) domain was registered to make available to the public the outcome of the project on Internationalization of GRASS5.0 and Mapserver. The project was funded by IPA (Information-technology Promotion Agency,Japan). The project was carried in cooperation between Orkney Inc. and Osaka City University(OCU). Apart form software internationalization (i18n), OCU was also responsible for testing, preparation of test data, sample applications and implementation and management of the portal site. The main portal site was made available at www.foss4g.org/FOSS4G/ and also www.grass-japan.org/FOSS4G/

The domains were registered with Venkatesh Raghavan (aka Venka)and Shinji Masumoto of Osaka City University, Japan in 2003 and the project portal site went online in March 2004. Venkatesh Raghavan (aka Venka)and Shinji Masumoto agreed to donate the foss4g.org domain name to OSGeo on 3rd October 2007 with the understanding that there will be no restrictions on the free usage of the FOSS4G acronym for the legitimate purpose of promoting Free and Open Source Software for Geoinformatics. Subsequent to the transfer of foss4g.org domain name to OSGeo, it was used as a domain name for FOSS4G events since FOSS4G2008 held in Cape Town, South Africa.

The OSGeo Conference Committee is the steadying factor of FOSS4G over the years. Organization of FOSS4G starts roughly 2 years in advance as the venue rotates around the world when a call for bids is sent out.

All the hands-on ground work is done by a volunteering Local Organizing Committees that form each year and have so far always excelled themselves at putting together a great conference. OSGeo is very thankful and excited to see this much effort going into each conference. As of 2007 all conference web sites can be found under the generic OSGeo URL by replacing the year as in http://2010.foss4g.org/

Overview of past conferences and attendances

Some Local Chapters put on localized FOSS4G conferences, for example:

Roll Your Own Conference

If you are interested in organizing "your own" conference please contact the Conference Committee and advertize on the Discuss Mailing List. OSGeo is always interested in lending a helping hand to seed organize local events. We are also building a FOSS4G Cookbook to help in planning and executing a FOSS4G conference.

FOSS4G is not registered as a trademark but has a long tradition of being used in the context of Free and Open Source Software for Geospatial. The domain was originally registered by Venkatesh Raghavan (Venka) who later graciously donated it to OSGeo - under the condition that using the name should stay open to anybody who does something reasonably related to Free and Open Source Geospatial. If you are not sure, simply ask on the main mailing list (starting from here).