Why this document exists

This is a "straw-person" set of suggestions, and comment / additional references would be gratefully received.

Graph illustrating a basic metadata model generated from an RDF model of what OSGeo Geodata Committee participants have identified as their core needs for metadata.

This picks an arbitrary namespace for an OWL schema that maps to most, if not all, of the FGDC mandatory properties and provides some extra ones. 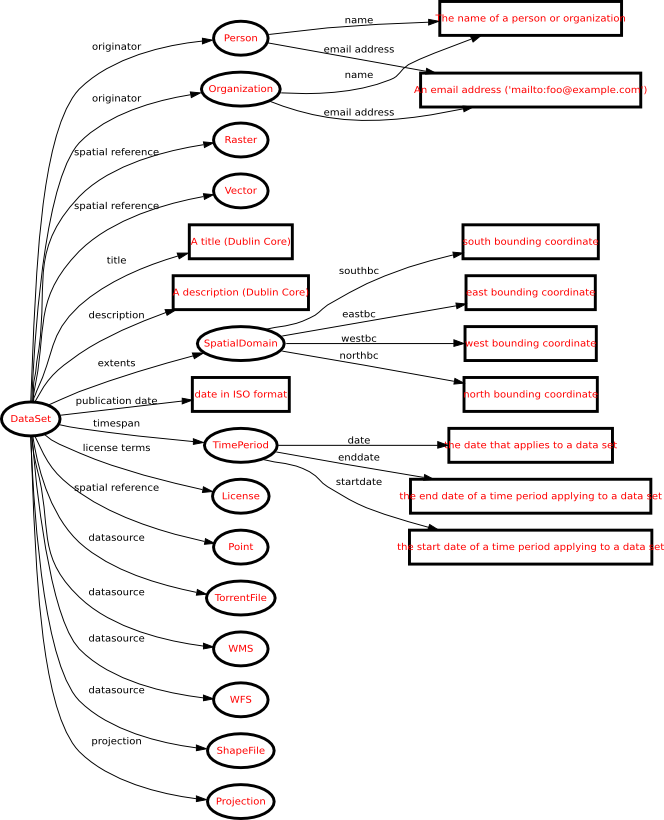 Title of the data set. Corresponds to Dublin Core title

A person responsible for publication of the data set - name and contact email address. These properties are well-defined in the FOAF vocabulary.

A organization responsible for publication of the data set - name and contact email address. These properties are well-defined in the FOAF vocabulary.

URL from which the data can be downloaded via different protocols

For Vector data in GML

For Raster data described in GML

A lot of this can be inferred either using GDAL/OGR or collected from a WMS/WFS GetCapabilities. It would be nice to bypass human error on collecting this kind of metadata.

FGDC specifies north, east, west, south bounding co-ordinates. It doesn't specify a projection in which these should be described. For reasons of simplicity it could make sense to require these be in WGS84 (EPSG:4236) - for the same reasons GeoRSS decided to mandate WGS84, rather than complicate matters by dictating that people also specify an SRS.

Original projection of the data (reference to an

Currently undecided; would be good to refer this to current well-known thesauri for data themes.