Information for the OSGeo Board

Title of the event

Townhalls are "power-networking events" hosted at the European Geosiences Union (EGU) General Assembly (GA) for up to 350 people.

EGU-wording: "Townhall Meetings are meetings open for all participants in the conference at which new initiatives or decisions are announced to a larger audience following an open discussion on the matter raised."

Townhalls are hosted in the evening following the conclusion of all scientific tracks. The events last one hour and usually have presentations / announcements taking up the first 20 minutes, to allow for an open discussion among the attendees. During this phase, refreshments are provided to ensure a lively and convivial atmosphere.

Attendees are expected from the following fields (Academia, Research and Industry).

how will our participation help OSGeo

Summary Report for the OSGeo Townhall at the EGU 2014 GA

EGU Board Request for funding

- allocate 10k USD in OSGeo 2015 budget for the ICA-OSGeo-ISPRS Students Awards initative. The funds will be requested by the award's committee with a detailed fund request.

Give-aways: USB-drives with OSGeo Life 8.5 ready by: Will be sent to hotel in Vienna by FOSSGIS [OK]

Catering money coming in from OSGeo by:

Catering planning will be based on lessons learned in 2014. The room holds 122 persons max. Catering guestimate: 100 attendees

2015-02-26: Poster was sent to COPERNICUS (based on OSGeo Design). COPERNICUS (Katja) confirms reception.

Outcome: The townhall posters were integrated into the advertising/announcement pillars. Actual size of print: About A3.

todo: upload picture of pillar with poster on it

2015-02-20: No response from the creator of the Pulp-O-Mizer Steampunk website regarding a hi-res poster 2015-02-26: low-res Pulp-o-mizer poster-handout was created for use during the conference.

task: Produce sufficent copies (A3/A4/A5) AHEAD of the conference, to be carried to Vienna.

- Mugs were ordered by an online printer in late March. Delivery within 48 hours. Uncritical delay due to postal strike in Germany.

option for 2016: buttons / patches option for 2016: OSGeo patches to sew/stitch on apparel. OSGeo-stickers were used in this manner in 2015 (short lasting effect, but it worked).

option for 2016: Consider hand out of USB-sticks if a teaching event can be arranged.

This was not followed through in 2015.

2015-02-27: FOSSGIS e.V. Conference Team (Katja) confirms that surplus give-aways can be picked up at the end of the FOSSGIS conference in Münster, to be used up during the Townhall.

2015-03-13: Agreement with Katja Haferkorn (FOSSGIS) that the most of the FOSSGIS leftover material is sent by parcel to Vienna. A batch of fallback materials will be brought by Peter. Agreement to use the 40-something (?) USB-drives produced by FOSSGIS and to sell them for 5 EUR (don't make it too cheap..) at the Townhall. Revenue to be returned to FOSSGIS e.V.

execution: Markus and Edzer gave improvised lightning talks. Both are great speakers with deep knowledge in both Science and OSGeo. This sparked a lively discussion.

- Confirmation for pricing of USB sticks was requested from FOSSGIS (suggested price: 5 Euro)

- Madi, Alessandro and Peter launched the guerilla marketing on Monday morning. A5 leaflets were deposited both on Monday and Tuesday at central points, PICO session and poster sessions.

- Organizers and speakers received their commemorative mugs shortly before the afternoon.

- Lesson learned: Include Townhall announcement poster in any preceding PICO sessions and oral sessions (this already worked well in 2014).

- Lesson learned: A mid-sized OSGeo-banner would be useful for branding.

- Lesson learned: Start on time with a "warm up" presentation / discussion. High value content to be shown after 19:15.

- Bar was opened after the introduction. This was taken well, although most refreshments were consumed during the last 30 minutes.

- Madi did headcounts of attendees at the beginning, middle and closing of the event (about 50 people during the whole event)

- The event closed officially at 20:00 hours. Discussions continued. We had some latecomers (including Prof. Dawn Wright of ESR! !) who came in after other competing Townhalls closed at 20:00 hours.

- Security started shooing us out around 20:15

- Lesson learned: Trying to sell OSGeo-live-sticks to an audiencce which is already OSGeo-aware is not effective. Instead, the USB sticks should be used as give-aways during events reaching out to young scientists.

- Peter: The symbiontic entanglement of OSGeo and EGU (and the significance of base caps): File:EGU OSGEO Townhall 2015 RELEASE V2.pdf

- Role of OSGeo within EGU

- Most consumables like flyers, stickers, etc. were handed out / deposited for take away during the remaining days of the conference.

- Remaining FOSS4G-2015 stickers will be carried to FOSS4G-EU to be used there.

- Remaining USB-sticks will be returned to FOSSGIS (point of contact: Katja Haferkorn),

- Revenue from USB-stick sale (10 EUR) will be handed over to FOSSGIS.

- Caterer will charge for refreshments.

- Re-alignment of AGU ESSI session on FOSS: From "show and tell" to the strategic role/impact of FOSS in Open Science / Science 2.0

Participants: 11,837 scientists from 108 countries participated, of which 23% were students

42 participants gave their E-Mail details to be informed about future events. 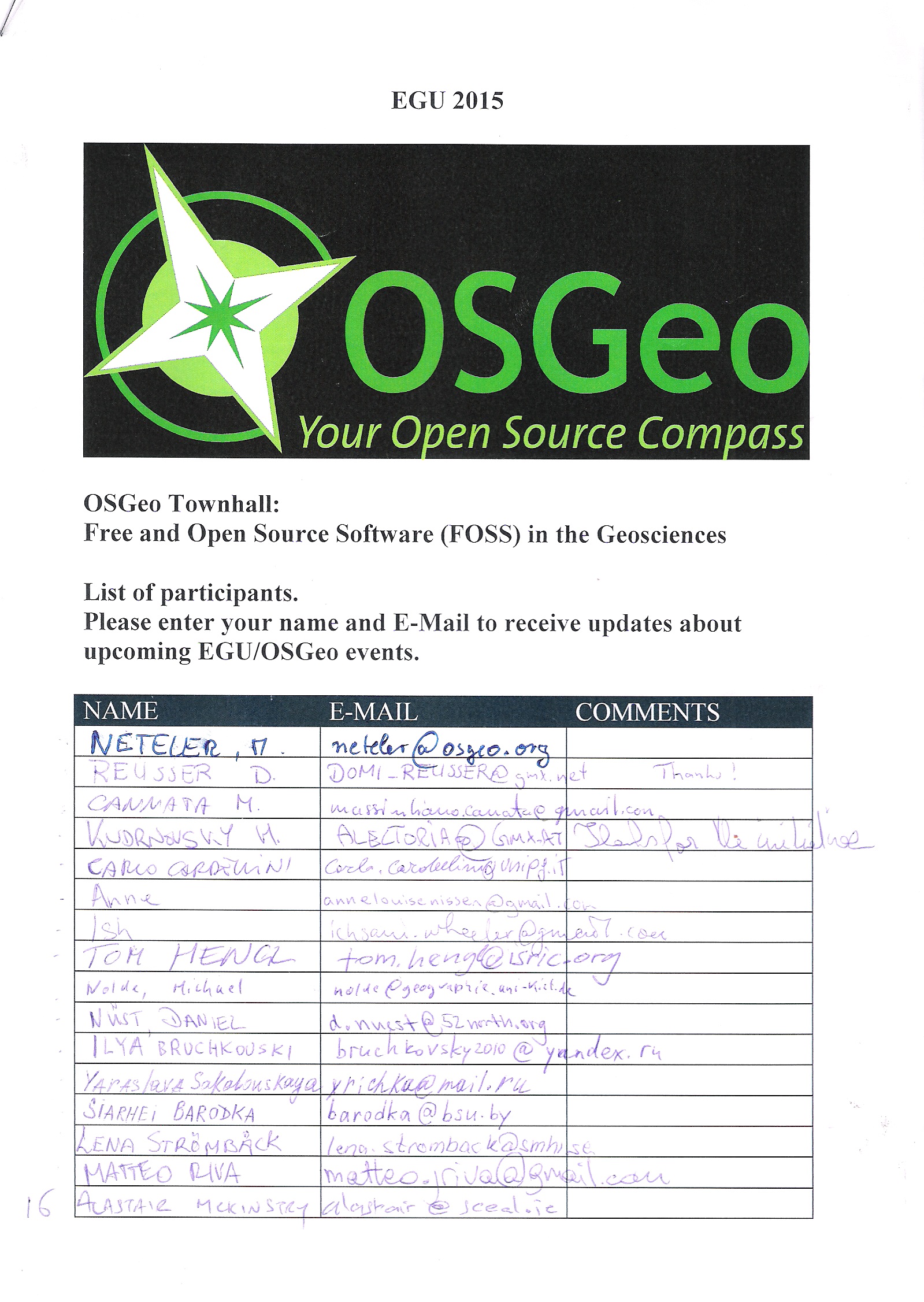 - Townhall (saturation has been reached -> 50 participants). Competition with similar events in the same timeslot most likely to continue. Most attendees in 2015 were already familiar with OSGeo (-> Birds of a feather). No need to preach to the choire. Reach-out to newbies needs different channels.

- Opportunity: Prepare a short course (one evening or multiple events), based on OSGeo-live, which gives introductions to several software tools. Great multiplier effect if attendees could take a USB-stick away for further self study.

- Opportunity: Set up a "EGU Survivial Guide for you OSGeo Scientists" in the OSGeo Wiki. Content: Phrases & wording how and why FOSS is significant in research. This avoids reinvention of the wheel and lowers the curb to include these topics in posters and presentations

- Opportunity: Set up a EGU poster template by OSGeo and provide it in the OSGeo Wiki.

The topic of FOSS is currently addressed in parallel within multiple EGU Divisions. This is most prominent in the Divisions of Hydrology and Earth and Space Science Informatics (ESSI) which both include dedictaed FOSS-focused tracks. Representatives from both Divisions participated in the Townhall.

FOSS was explicitly addressed during the ESSI Division Meeting:

- ESA is driving FOSS and open data efforts to increase the developer base for their software efforts. The terminology for this "Science 2.0" or "Open Science" (still to be discussed).

- A sub-group within ESSI will be set up under the guidance of ESA to drive this.

- Currently there are no dedicated E-Mail lists by EGU to foster FOSS-related discussions.

- Within AGU, NASA has taken the initiative and is supporting AGU-ESSI with by a dedicated topical mailing list.

- Opportunity: A ESSI/FOSS-related mailing list hosted by OSGeo would be very beneficial to continue communication within the EGU-FOSS-community during the year.

- In ESSI, there were occasional non-FOSS-related submissions during the last years. OSGeo could support ESSI/EGU by developing minimal requirements applicable to a FOSS-themed submission to aid and guide scientists.

- The topic of sustainable (repeatable) and open science affects all EGU divisions. This topic needs to be discused from teh scientists perspcetive both with providers of FOSS and propietary software tools.

The impact is similar as for EGU. We have secured our topical bridgehead. The AGU twin session on FOSS in ESSI will advance in 2015 from "show and tell" towards the actual impact of FOSS for Geoscience.

Overall expenses (catering + give aways + consumables) were well below the amount ok'd by the OSGeo Board. 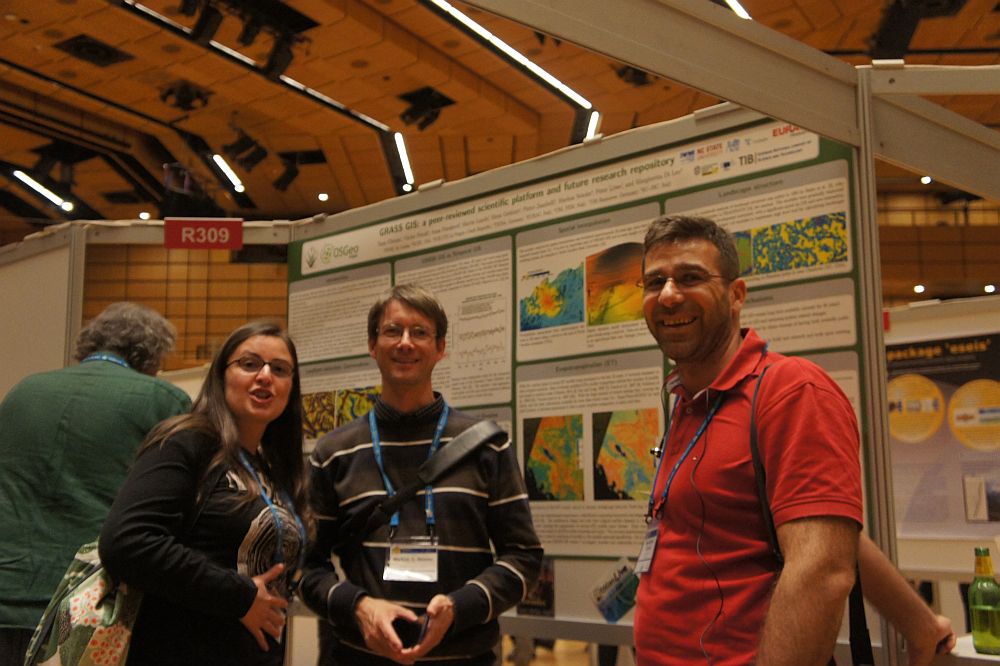 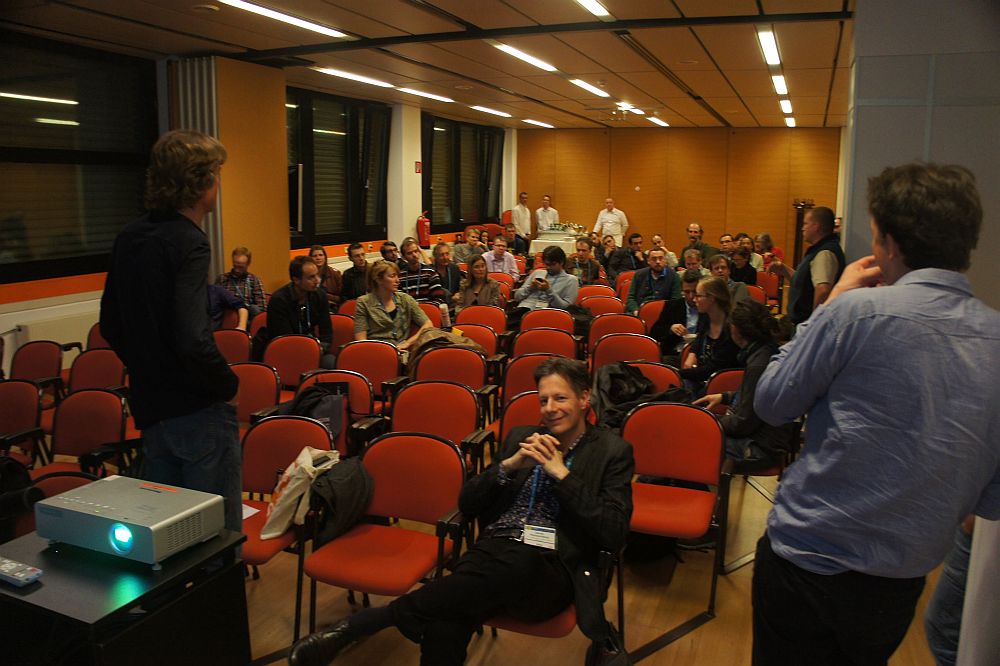 Markus Neteler during his presentation 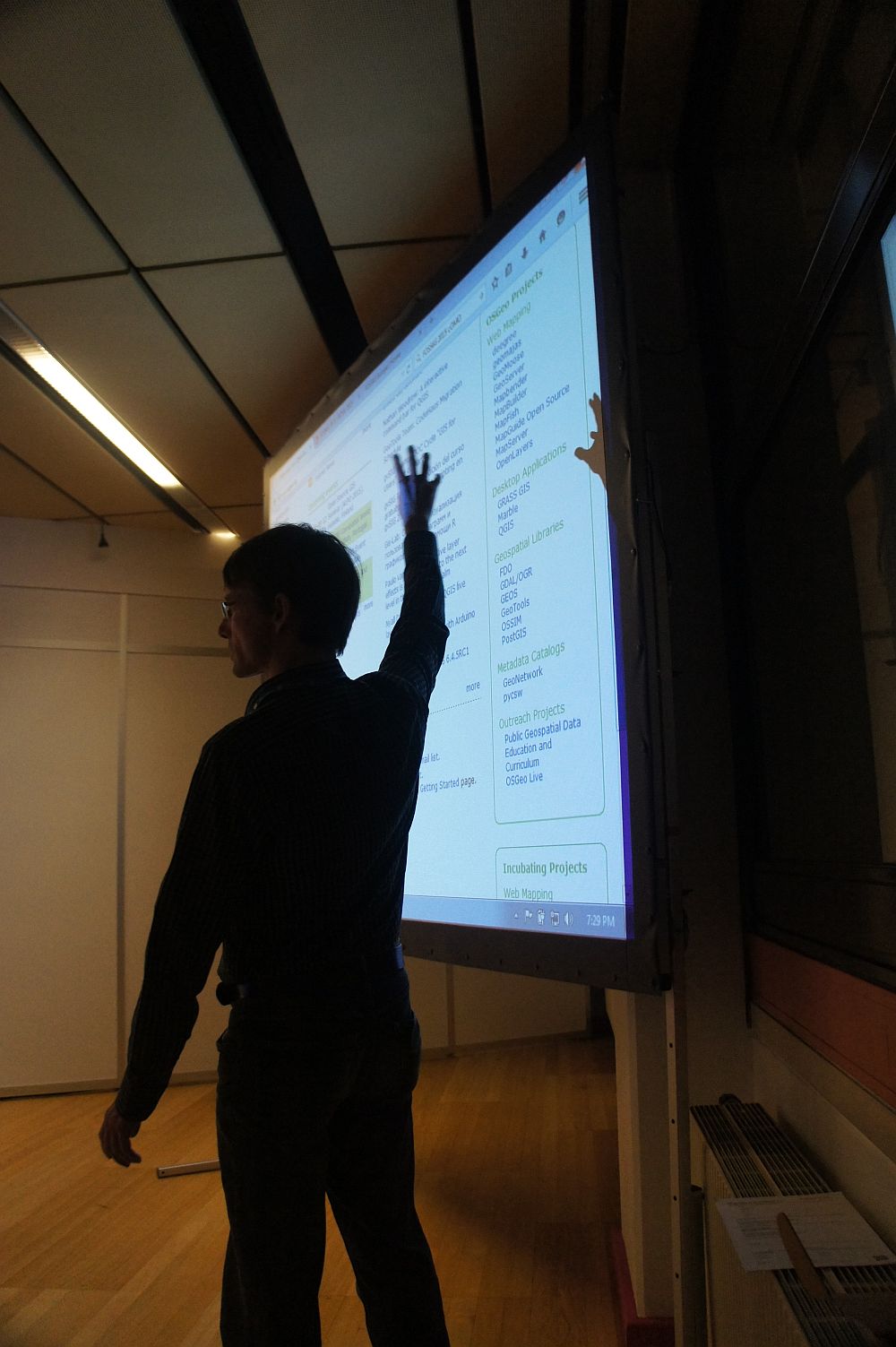 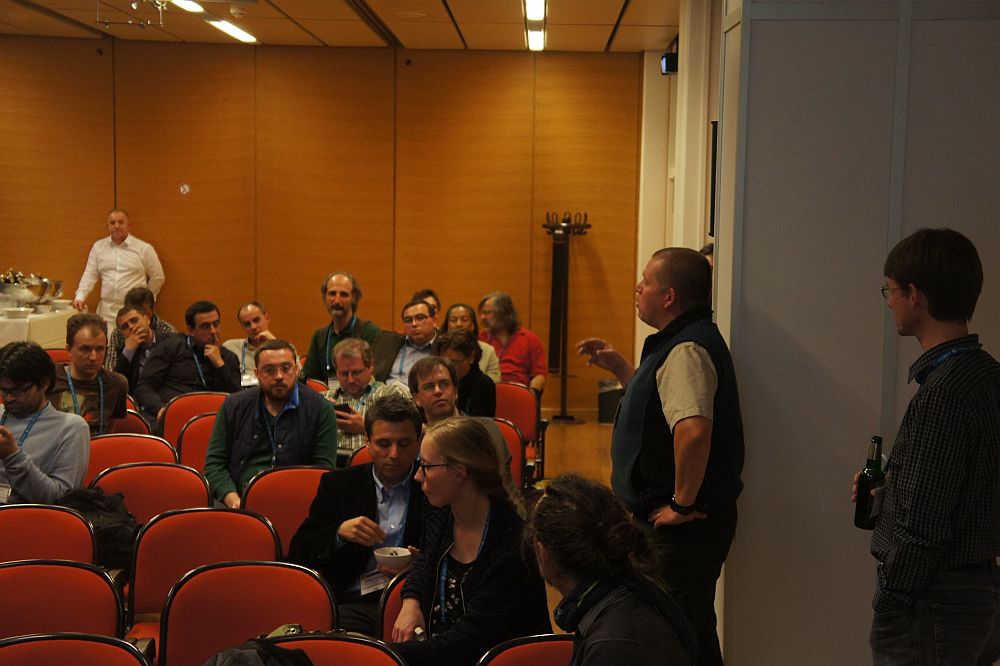 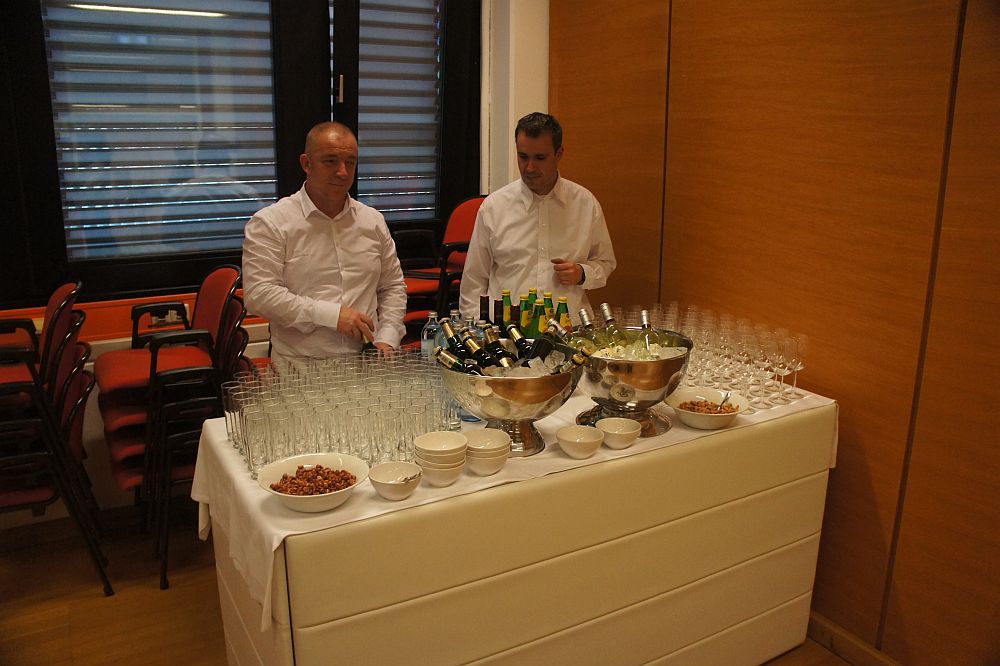 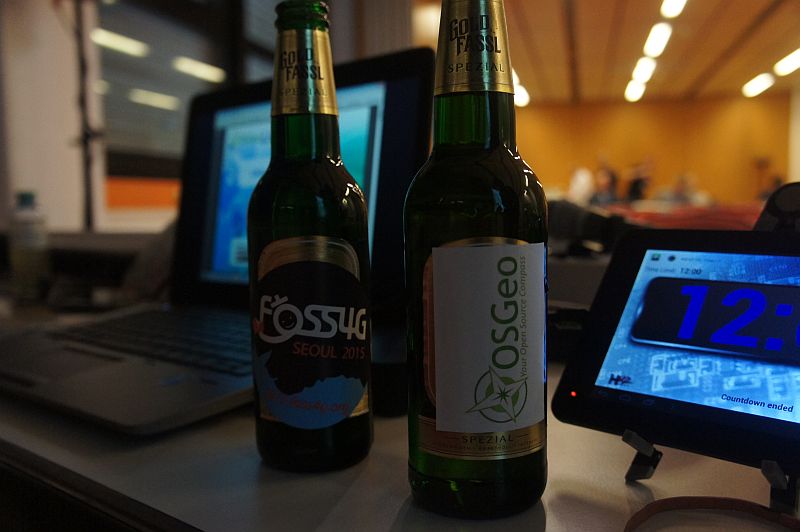 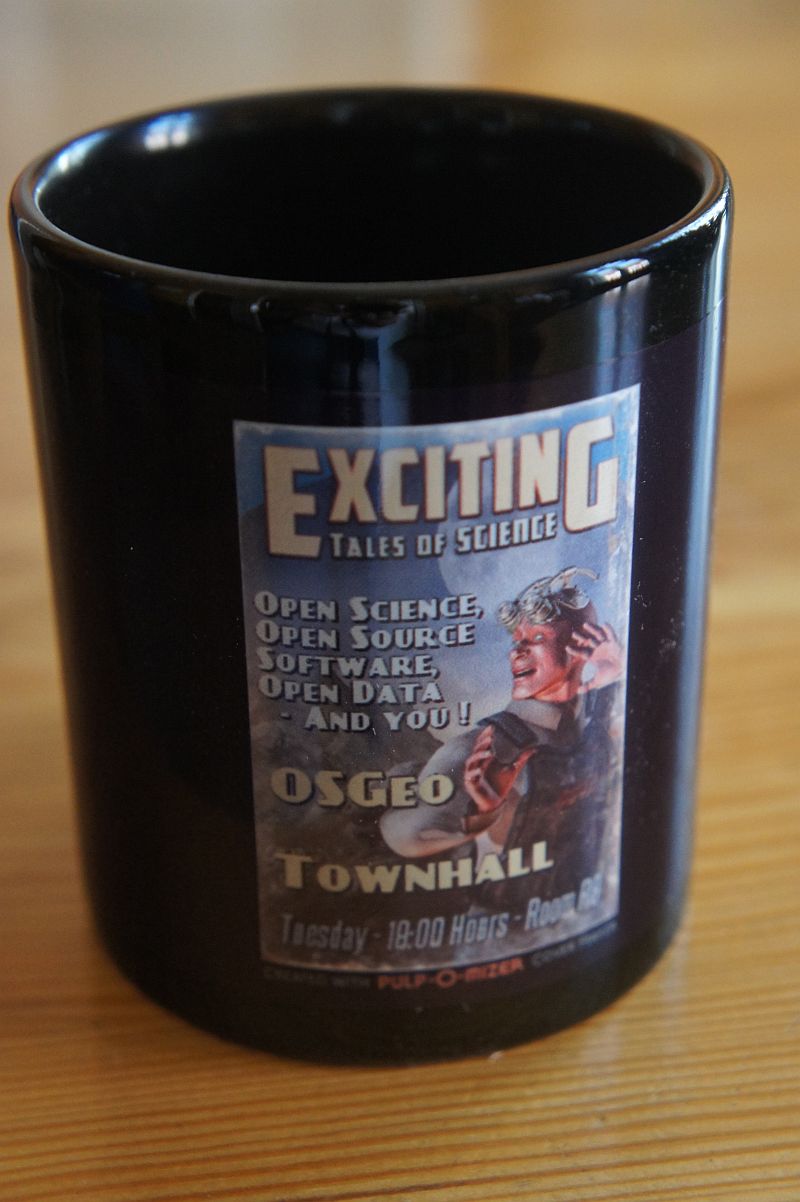