Difference between revisions of "GDAL2Tiles SoC 2007"

For suggestions and new ideas please use Talk:GDAL2Tiles_SoC_2007. 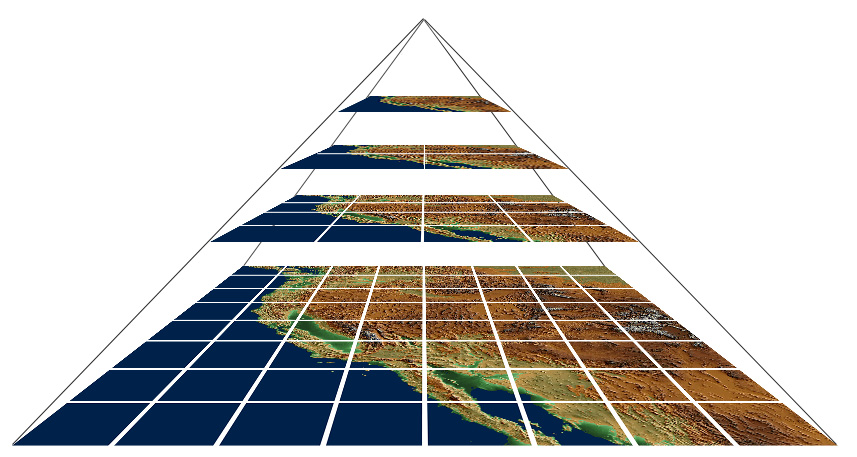 Implementation of Raster Driver for GDAL library, which will allow to write PNG/JPG Pyramid Tile Structure as a newly supported file-format. Generated tiles will contain also XML metadata, so after putting them on any webserver they could be used as data source for:

and probably other viewers.

Implemetation of the file format driver will allow to export map raster data into Google Earth, Google Maps and other online viewers from any of applications which use GDAL library.

Idea for this project was suggested by FrankW at GDAL SoC Ideas.

Microsoft Research project MapCruncher also generates tiles, but with metadata only for their MS Virtual Earth.

Zoomify could be now used as tiling program for SuperOverlay in GoogleEarth with free ZoomifyerEZ and generator ZoomifyKML (which I created as a part of my Master Thesis).

What new functionality this project brings

Clean open-source implementation of tile structure export. Any application which uses GDAL library will easily be able to export files into a tile structure. Supplied utility gdal2tiles will convert any supported file format with georeference into tiles, it will also allow batch mode processing of files.

GDAL is strong library for processing maps and large raster files, including reprojection, so any already georeferenced maps could be easily converted for simple on-line publishing on a webserver without special server requirements (like MapServer is). Advantages of this approach are described in TMS Specification.

Reader could be implemented later, which will (with support on the side of UNM MapServer) allow to access published tile structure using WMS standard, where UNM MapServer will act as a proxy.

Several organizations and individuals who handle processing of maps.

Institutions which will use the 'gdal2tiles' utility from this project, as I am cooperating with them:

My name is Klokan Petr Přidal, I have finished Master degree in Applied Informatics at Masaryk University in Brno, now I am in the first semester of postgraduate study of Cartography at Czech Technical University in Prague. My Master thesis subject was "Processing and Digital Publishing of Historical Documents" (PDF of thesis in Czech).

I am familiar with open-source projects. I have experience with Linux/Solaris system administration. I like Python language, but I have also used other languages (C language, PHP). I have supplied some patches into Gnumeric (#330129, #334257). I founded a http://mplayerosx.sf.net/ project and I also won a competition in programming application for Mac using http://dictosx.sf.net/ (Objective-C). My primary desktop is Gnome and Linux, but I also use Mac, Windows and Solaris. I did programming for all of these platforms (mostly smaller projects).

I am interested in historical cartography, I have several presentations about old maps and free software. I made a czech web page about it at http://www.staremapy.cz/ and registered domain http://www.oldmapsonline.org/ (which is not in use yet).