This design aims to be a summary of ideas from Mapbuilder, OpenLayers, and webmap-dev communities regarding vector rendering design. This is not supposed to be the final design, but rather draft to be used to facilitate further discussions. My hope is that the final version of this design will be used by all the AJAX webmapping clients to make sharing the same code base easier. I'd like to credit Patrice Cappelaere who has SVG/VML rendering working in Mapbuilder and deployed at GeoBliki. This design aims to extend Patrice's code to be more generic and extensible. 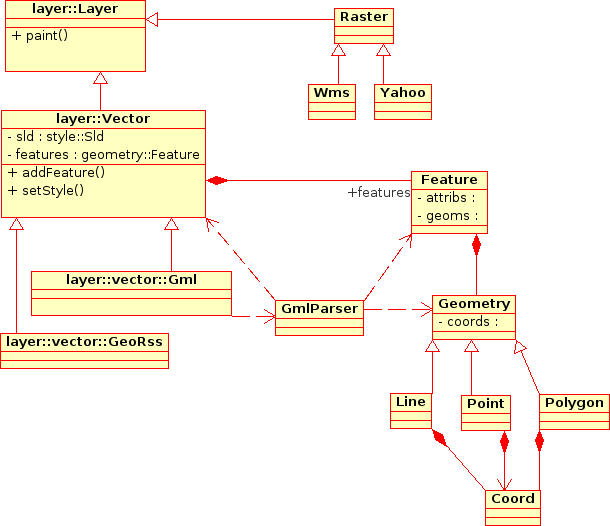 The layer/Vector class is responsible for storing a list of Features and Styles. It calls a Parser to load Features as required (eg for a Web Feature Service), and initiates rendering by calling Renderer.

As a map is zoomed out, the number of features that needs to be rendering increases significantly - to the point where a browser becomes too slow, or crashes. 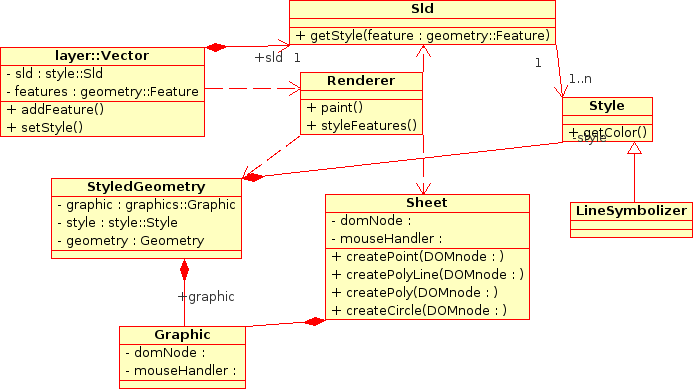 Renderer is responsible for:

There are plenty of opportunities for optimizing rendering, and this logic belongs in the Renderer. Eg:

Cameron Shorter: StyledGeometry should probably be merged into Feature. There is a 1:1 relationship between the 2. 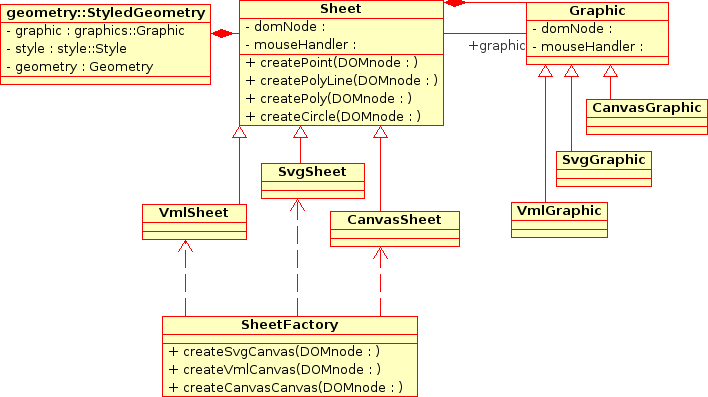 Sheet and Graphic represents graphic primitives. They deal directly in pixel coordinates and know nothing about the spatial objects they represent.

Sheet represents a vector rendering engine and is responsible for creating shapes.

Graphic represents a graphic shape (line, polygon, circle, etc). It points to a physical shape in the HTML DOM.

SVG SVG is inbuilt into Firefox 1.5+, ie doesn't require a pluggin. Not provided in IE 6.0. SVG allows mouseEvents to be attached to shapes. 10,000 features takes ~ 40 secs to render. (MSD3 dataset)

Canvas Canvas is provided with Firefox 2.5+. Is reportedly faster than SVG. But you cannot attach mouseEvents to features.

WZ GraphicsA library available for older browsers which draws a line by drawing hundreds of colored DIV tags. This is limited by the size of the data it can render. Suitable for ~ 50 lines, ~ 1000 points.

This functionality makes it easier to select a feature by clicking on it. The work around (for Canvas) will require a search algorithm to be written in JS to search through all the features.

There are opportunities for collaboration with other projects/libraries in this Graphics package. In particular:

The Parser objects will parse source documents (usually in XML format) and build Javascript objects. Documents to be parsed include:

MouseEvents can be attached to each Geometry. This means that we can add functions like:

The source UML diagram is stored in the Mapbuilder subversion repository at: https://svn.codehaus.org/mapbuilder/trunk/mapbuilder/mapbuilder/design/uml/graphics.xmi It was created using Umbrello on Linux.

John Frank did an excellent job outlining the major use cases for Geospatial Vector Rendering:

Better vector data support in OpenLayers will help many of us. I am totally in favor of it. To reality check the proposed design, I'd like to see a few use cases sketched out. Here are a few that seem important to me. Each use case has two components: a user interface challenge and a datastructure challenge. There will typically be many solutions to the user interface challenge; I'm suggesting we think of at least one UI solution to check the proposed nouns and verbs. The canonical "user" is always a very Tough Customer, so I use that as though it were a person's name, and their initials are TC

Some additional use cases added by Stephen Woodbridge:

This is a code review of the 2 vector rendering code bases at:

I realise that others have contributed to both code bases, but from now on I shall refer to the two code bases as Paul's code and Bertil's code.

The intent of this review is to make suggestions on how the 2 code bases can be merged into one.

Paul has a good programming style. I like his commenting, use of inheritence, and completeness when it comes filling in all the initialisation/destroy/etc type functions. I'd like to see this in the final code base. At the moment, Paul has working code (old design) and half complete code (new design).

Bertil has working code and a solid design.

What I suggest is that we start from Bertil's code base, and apply patches from Paul's code and a couple of changes to the design.

Bertil's code seems to depend upon prototype.js. As I understand it Openlayers have tried to remove the dependance upon prototype so this should be fixed.

The concept of Geometry is common between the two designs.

Bertil has coded this at OpenLayers/Feature/Geometry/* , I can't find something similar in Paul's code. So I propose we use Bertils code for this.

The trunk version of OpenLayers shows a WFS.js class as a child of Feature.js. This doesn't seem right and isn't reflected in either design. We can address this later.

Both designs have a Layer/Vector class which is roughly the same. There are parts from both implementations which we will probably want to use. From Bertil's:

My aim here is to seperate the Cross-browser Graphics from the GIS code. Seperating the Graphics out will make it easier for us to build upon Graphics libraries that will be developed and optimized by other projects.

In our first cut, we don't need to use style, we can hard code all features as red, then insert the Style object later.