Exercise: A spatial model of a catchment

Note 1: this exercise is designed to be used with libral and Gtk2::Ex::Geo tools. Note 2: the tools have to be currently the CVS versions.

Students should follow the outline below and do the same procedure for a catchment of their own selection. Each step may involve explanations by the teacher.

More information about the tools

Steps of the exercise: 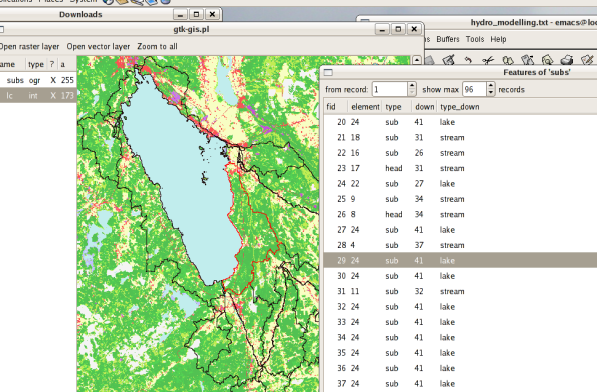 (*) the clipped piece is automatically a plain libral raster, it may (and should) be saved by saying(**) $lc-save('lc'); later the saved raster may be opened in the usual way, but it needs to be "librated" by clipping to <self>

(***) in the clip dialog, select a raster to make a raster that is overlayable to it

(*4) this can be checked by saying: p($self,$fdg->contents), which computes the contents (number of cells having different values) and prints it