This is a draft at the moment!

The event was free to attend with all of the costs (see below) funded from OSGeo:UK reserves. 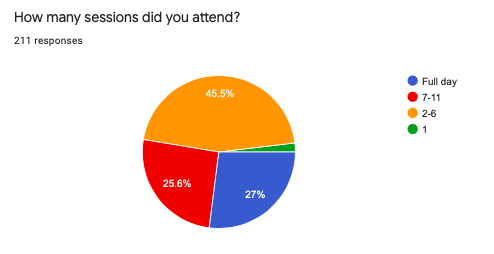 We over-provisioned because we did not know how many people would actually log-in. We could have managed with smaller accounts and saved some money.

It is unclear whether we would have been better off purchasing zoom webinar licenses rather than large meetings.

We were aware that the Zoom meetings could have been streamed to YouTube but we did not see any significant benefit from doing that. In fact it could have pulled attendees away from the main conference.

Options for the future

We have received some retrospective suggestions for alternative tech approaches to running an online event. Hopefully others will be inspired to run further online FOSS4G events and they will experiment with these.

Our choices were based on a need for a low effort tech approach given our small team and pressures on our time. Despite the poor publicity that Zoom had received re security during the COVID crisis we found that the security features available were sufficient for our needs.

We used eventbrite for our registration system.

We used WhatsApp for team communications in the build up and on the day. We also had a group for our volunteers and were able to share updates with the volunteers before the event and it was the main channel of communication on the day

We could have considered a speakers group in addition.

We used Twitter as our main channel for publicity prior to the event. It is important to recognise that not everyone is on Twitter, and future events should consider what other channels to use for communication with potential participants. One or two posts were replicated on LinkedIn but there are no statistics to show how many attendees signed up because of this.

We used Twitter on the day for announcements, publicity and encouraged the participants to chat via Twitter.

What didn't work so well

What would we try to do if we ran another event?