After participating many years in the Google Summer of Code, OSGeo recently participated for the first time in the Google Code-in. Google Code-in is a contest held each year to introduce pre-university students (ages 13-17) to Open Source software development. Since 2010, over 4500 students in 99 countries have completed work in the contest. Students compete to win prizes of certificates, t-shirts, hoodies, and a possible free trip to Google headquarters in California, U.S.

Because Google Code-in is often the first experience many students have with Open Source, the contest is designed to make it easy for students to jump right in. Open Source organizations chosen by Google provide a list of tasks for students to work on during the seven week contest period; each task should take only 3 to 5 hours to complete, and can involve not only coding but also important community work such as documentation, outreach, communication, quality assurance/testing, and user interface design. A unique part of the contest is that each task has mentors from the organization assigned, should students have questions or need help along the way. 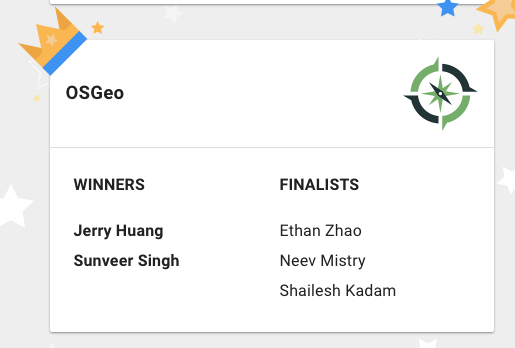 OSGeo administrators began working on OSGeo’s first application to Google back in early November. It was a huge undertaking, as mentor organizations create hundreds of tasks for the potentially thousands of students to work on during the contest period and are responsible for assigning mentors to help students with questions and to review students’ work on the tasks.

This year’s contest was held from 28 November 2017 until 17 January 2018, and had almost triple the number of students of the previous year. A total of 279 young students completed 649 tasks for OSGeo (530 students in total examined OSGeo tasks). OSGeo students were from many countries including: India, Poland, Pakistan, Thailand, United States, Russia, Germany, Cameroon, Singapore, Spain, Romania, UK, Vietnam, Dominican Republic, Turkey, Indonesia, Bangladesh, Canada, and others. The students were guided and supported by a great team of OSGeo mentors.

OSGeo’s GCI mentors and admins evaluated the results of the students according to the following factors: creativity, thoroughness, and quality of work. An additional criterium was the contribution to the community by interacting with and helping others.

OSGeo is pleased to announce the Google Code-in Grand Prize winners (who each receive a free trip to Google headquarters, along with a parent/guardian) are students:

See here: https://codein.withgoogle.com/winners/#winners the winners from all organizations.

OSGeo wholeheartedly congratulates the winners and finalists. We also thank all students working on OSGeo’s tasks for their great contributions to the OSGeo community.

All this wouldn’t be possible without the guidance by our mentors. OSGeo is deeply grateful for their hard work over 2 months of the contest. We are also grateful to Google for welcoming OSGeo into the contest as a GCI mentoring organization for the first time.

This has been a magical and fun experience, seeing the enthusiasm of the students for OSGeo, and how that fun trickles through the entire community. Thank you to everyone involved.