We have assembled in order to get things done.

OSGeo is ongoingly finding a structure that works to get things done. Here are two different kinds of structures: 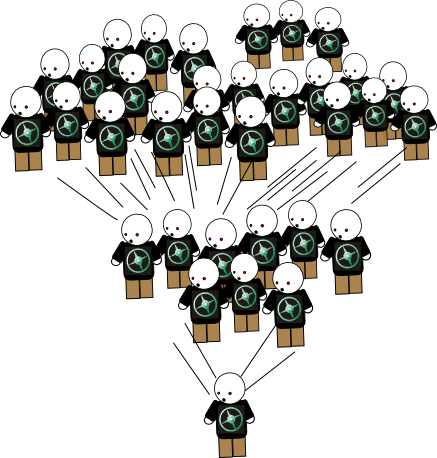 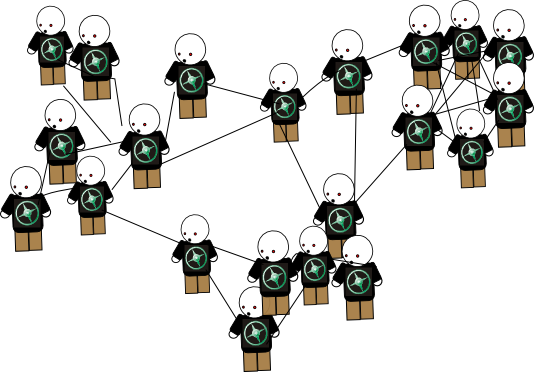 How does such a network generate meta level co-ordination - plan and learn from reflection? How can that be achieved? Limit the amount of instruction, focus on operations and the will and entitlement to enact them. "no jobs; just things to do and people to do them". Focus on co-operation without the need for more formal incorporation. Maximise redundancy while minimising the signal to noise ratio.

For by art is created that great ‘Leviathan’ called a ‘Commonwealth’ or ‘State,’ in Latin civitas, which is but an artificial man, though of greater stature and strength than the natural, for whose protection and defence it was intended; and in which the ‘sovereignty’ is an artificial ‘soul,’ as giving life and motion to the whole body Thomas Hobbes, Leviathan

There are a lot of things to Get Done. Some require an approval stage - typically the expenditure of money. At this point the Board's "B-Brain" kicks in and the Board has its own informal advisory group which can have more involvement in decisions.

There should be no unarchived communications. Private archives for sensitive subjects are permissible. Like those laws about politicians meeting up in California, if three or more OSGeo members are gathered for the express purpose of talking about OSGeo this should be logged somewhere (email bot, irc bot, IM bot; also at least call records of phone conversations).

Members of the fundraising group or people they recruit should be the 'main contact person' for one particular sponsor relationship of OSGeo's, and keep logs of their transactions. There are a lot of projects which it would make sense to sponsor some of a person's time to implement or maintain. This includes binary stack / liveCD projects, sysadmin, accounts management, organising a presence at conferences and encouraging people to submit talks about their projects. One high priority thing to get done is a shared infrastructure for really strong cross-distribution and promotion - shared documentation and educational resources - localised packages of data and interfaces and applications. OSGeo should help projects to synchronise releases and increase useful interconnectedness.