It was suggested to do it again on LinuxTag 2007. Please follow discussions on geodata and viscom-de

The LinuxTag 2006 was organized in cooperation with the German Unix Users Group (GUUG) on May 3 - 6, 2006, in the Rhein-Main-Hallen, Wiesbaden, Germany.

As every year since 1996, LinuxTag invites to take advantage of its unique synthesis: LinuxTag is a complete conference program and a professional exhibition; a unique information platform where .COM meets .ORG.

The PostgreSQL community booth was located just next to the OSGeo boot. People could learn about professional use of the PostgreSQL database system and then go to the OSGeo booth to see it in operation with spatial data. Vice versa people could get information on how to operate and optimize a PostgreSQL database after they saw it in operation with PostGIS to store, retreive and manipulate vectorial data in action. Many city maps in Germany are already using the power of PostgreSQL and PostGIS through the UMN MapServer software as the OGC WMS rendering engine and GeoServer (a GeoTools implementation) as the complimentary OGC Web Feature Server. 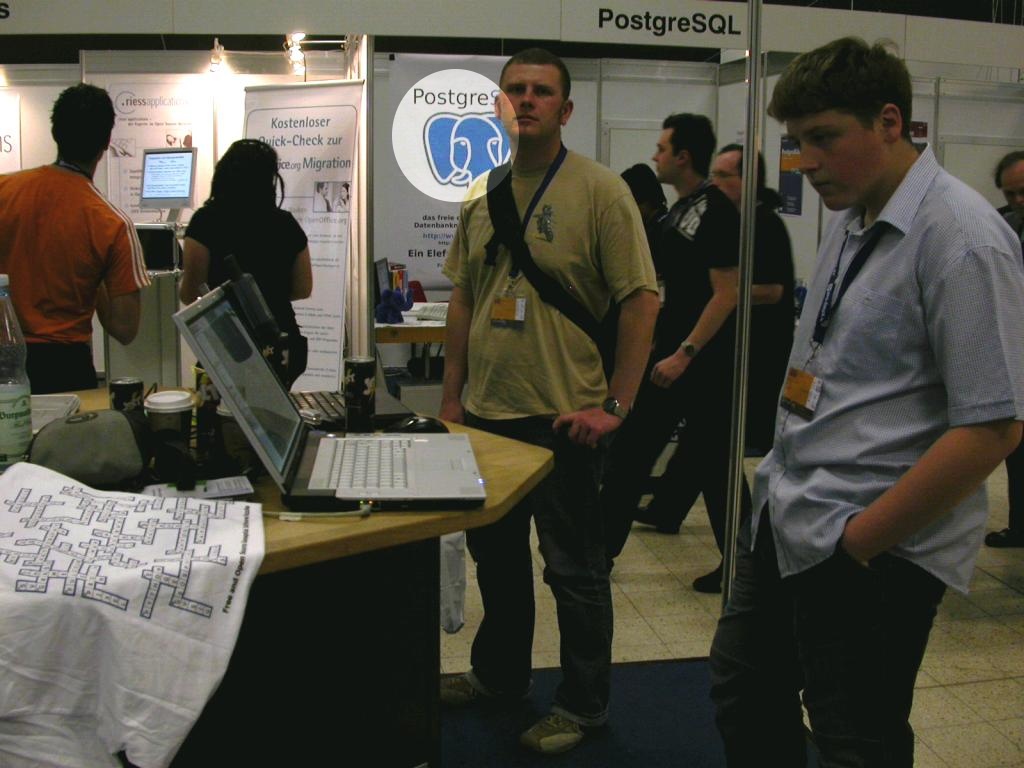 The focus of the OSGeo booth at the LinuxTag was on the software projects. Interestingly by far most questions asked by normal folk focused on availability, licensing and complaints about geospatial data. Approximately 50 individuals had the chance to get a personal contact to one of the people at the booth. All 200 OSGeo handouts were gone pretty quick so that some more had to be printed during the exhibition.

People just stopping by intrigued by the maps on the screens made up about 50% of all visitors. One of their main interest was trying to understand how they could use maps by Google in their private or not-so-private web sites ((we should charge Google for clarifying their lousy licensing model to people)). Most were of the very strong opinion that public geodata must be available for free to the public because they have already paid for it with their taxes anyway. Sometimes this impulse was so strong that they complained that we (the OSGeo Foundation) should not hang around showing off cool software at the LinuxTag but rather change local, regional, national and European legislation so that they could get free access to "their" data. This was really awsome. 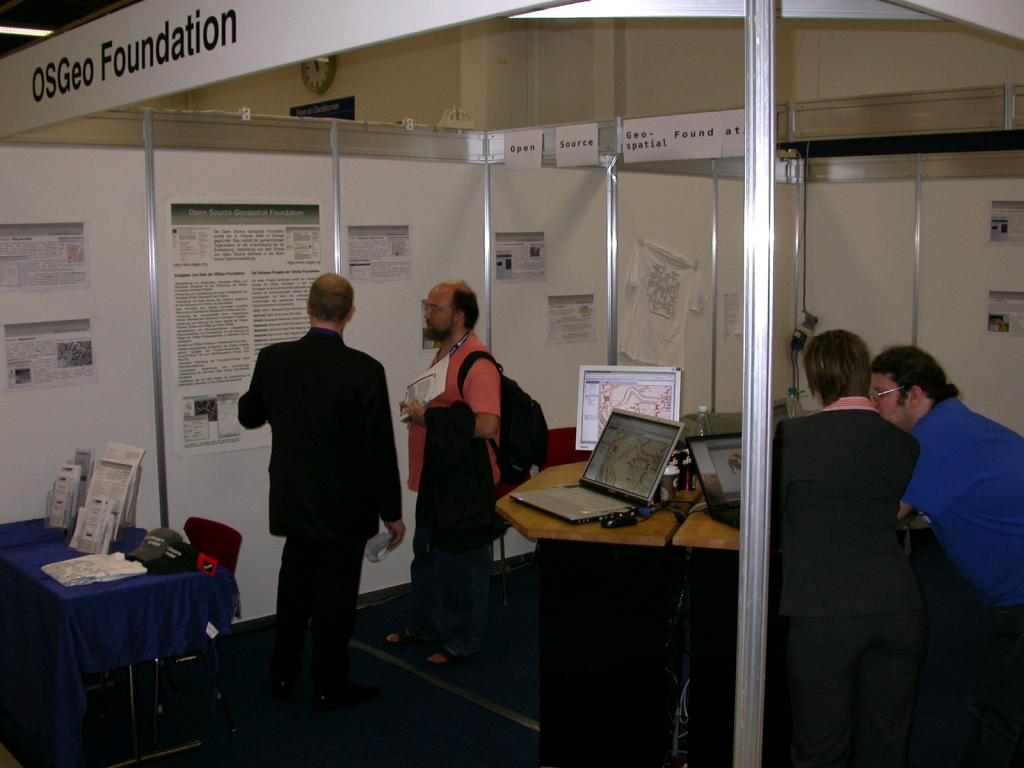 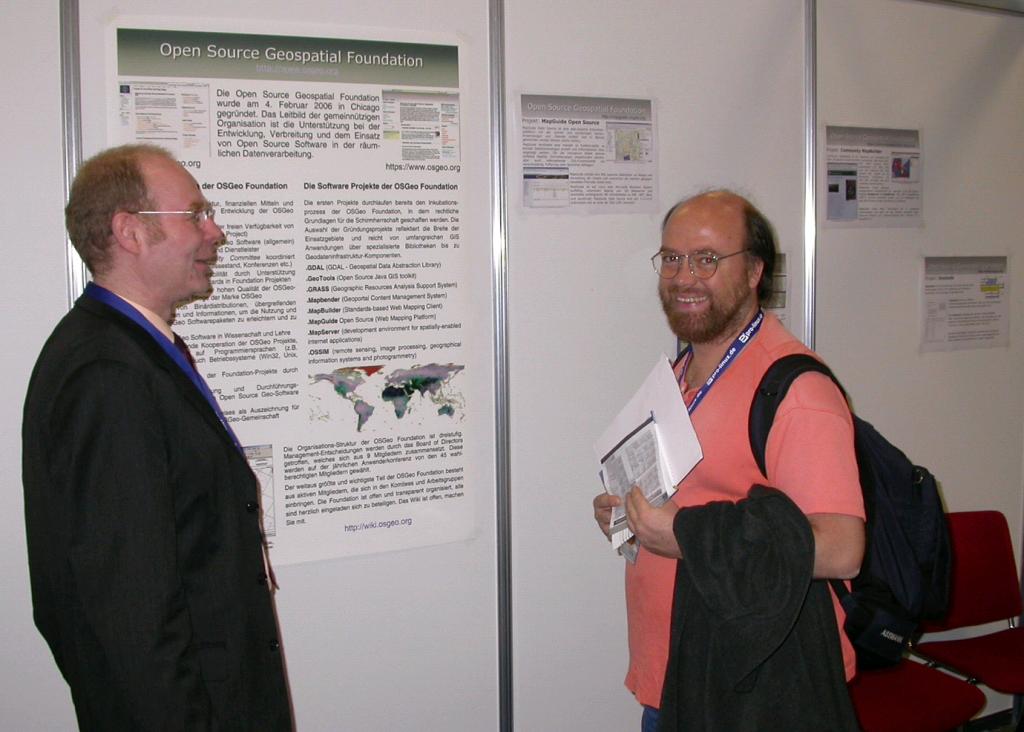 Detail of the poster arrangement


Visitors get individual attention and thorough answers to their questions regarding the OSGeo Foundation, involved software packages and committee work. Some people just wonder by, others get some insight hands on - an opportunity that many found to be very attractive. 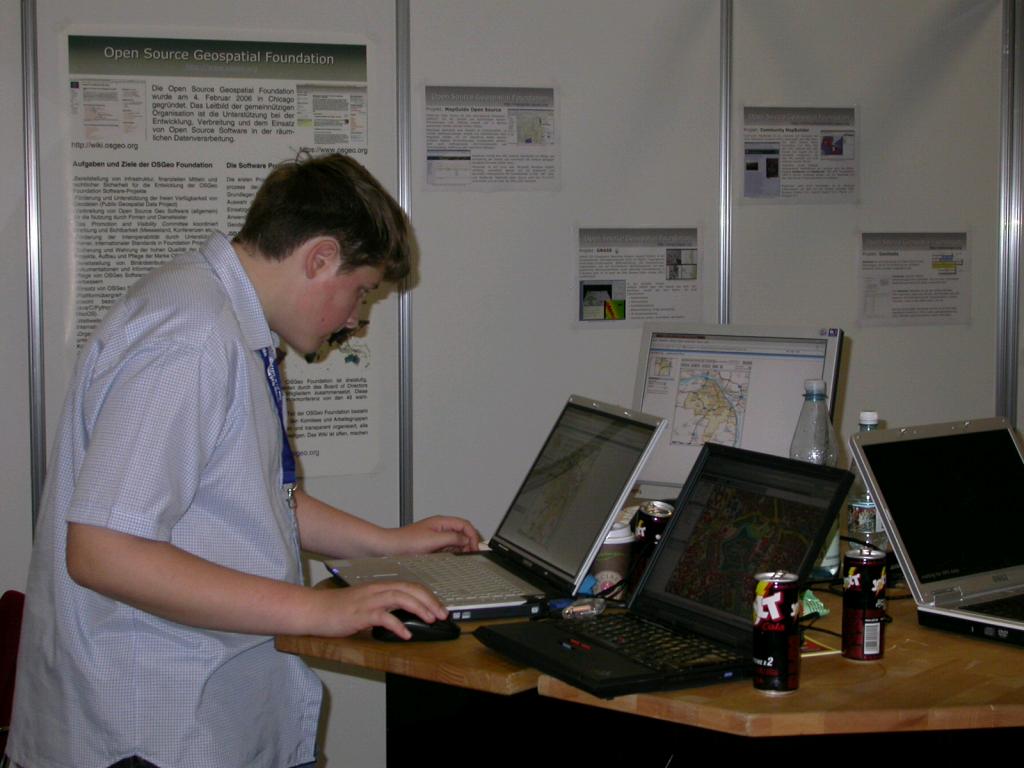 Real developers surprisingly were more scarse and made up around 10% of all OSGeo booth visitors. But they took their time to explain and understand things. Obviously about 1/3 of the discussions revolved around whether to hack in Python, Perl, PHP, C++ or Java and whether PostgreSQL is better or MySQL faster. Development regarding maps in Mediawiki and thus Wikipedia is continuing, but their stack of change request is rather large so that it will still take some time. 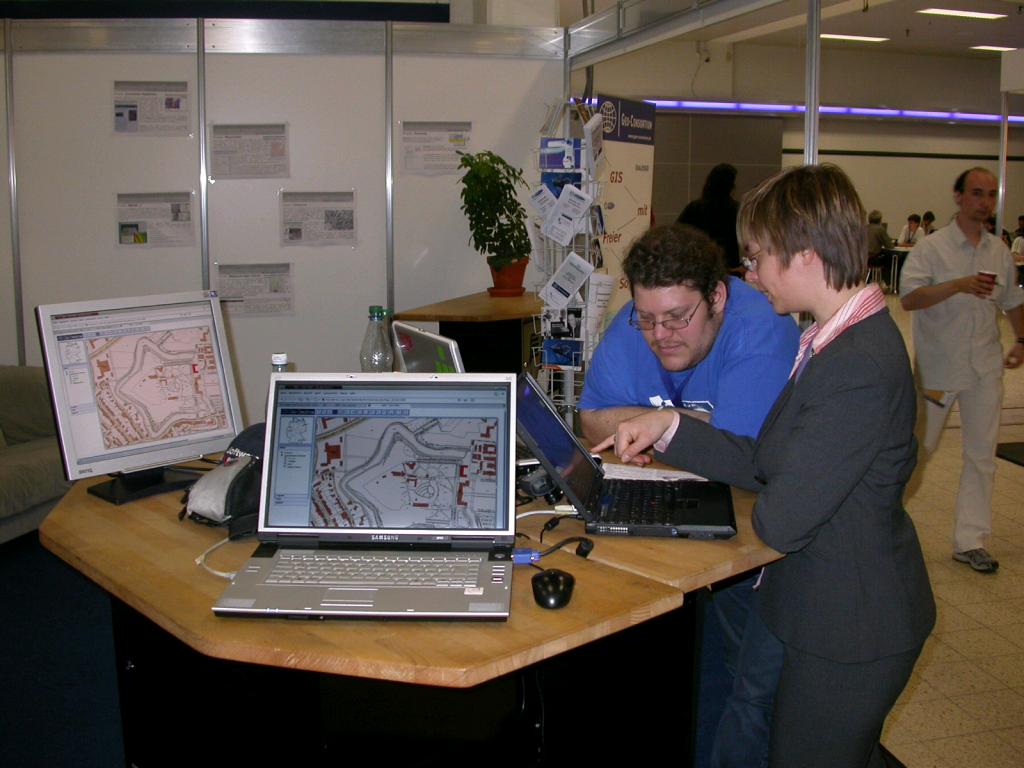 Silke Reimer from Intevation (maintainer of FreeGIS.org and Raphaël Jacquot from the project OpenStreetMap discuss implementations, strategies and exchange information.

GIS Pros made up around 25% and were the most satisfied visitors. Obviously those finding their way to the LinuxTag mostly are already biased toward Open Source but still many were positively surprised at how extensively OS software is already being used in the spatial context. 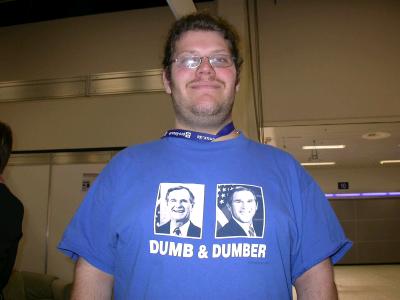 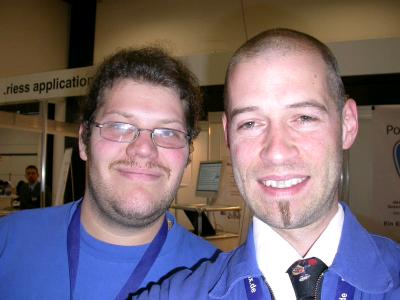 The lower and middle management level people that found their way to the LinuxTag were highly interested in the OSGeo Foundation. Unanimously they embraced the opportunity that the OSGeo will give them in convincing their superior management levels. The largest problem at this level is that the understanding of the advantages of Open Source and standardization in the geospatial realm grows bottom to top. And by default at one point the understanding stops too seep up because capillary force is not strong enough. References to a strong and healthy organisation can help overcome this problem and make decisions for the upper level management easier.

Thanx to all contributors, volunteers, and companies who helped staff and sponsor the booth. And naturally a big thanx to all our visitors for showing interest, joining in a help to spread the word!