During the FOSS4G2009 conference in Sydney, Australia, there will be conference rooms available for people to hold Birds-of-a-Feather sessions.

Birds-Of-A-Feather sessions are unstructured timeslots where people can self organise themselves to discuss topics of interest.

This year, Birds of a Feather sessions will be held on Thursday 22nd October.

A number of rooms are available. First ones in get the rooms.

The rooms will be available for longer, however remember that the FOSS4G Harbour Cruise Dinner starts at 1900.

If we get a lot of demand, we may need to reduce the time that each room is available for. This will allow us to share the resources between more people.

Below is a summary of the BOFs and when/where they will be run. Contact Tyler or Bruce for any questions or changes. Times and rooms may change - changes will be posted on announcement boards during the event.

You can use this page to organize your BOF session:

To start the ball rolling, seeing that everyone else is sitting back and waiting for everyone else: some potential discussion points:

We want to discuss an approach towards the upcoming INSPIRE data specifications and how to best support them in our open source software. It is important for the FOSS community to come up with a story that is more than just "Yes that is possible but contract us first". This BOF is to seek feedback from those of you that see the same need and to investigate if some work has already been done, seek input in how we would best approach this, if there are options for a Europe wide collaboration on this etcetera.

Questions and/or points of discussions are:

We have limited time, and a lot of things to discuss, so we'll cover what we can. I (Scott Mitchell) suggest that I can take notes as best possible to send back to Charlie / other interested parties on the mailing list; if someone else could handle watching the clock and herding us as best possible through our agenda that would be much appreciated.

Who is coming (initially populated based on mailing list responses - please add yourself if you're not here but you're coming):

Come talk about the future, organization and PSC creation of MapFish.

Lets discuss tools and techniques that can be used for capturing geographic information during participatory meetings which may be attended by those possessing local knowledge learned over generations.

"Maps are more than pieces of paper. They are stories, conversations, lives and songs lived out in a place and are inseparable from the political and cultural contexts in which they are used."

Nine participatory mapping 'birds' flocked into Parkside G04 at the end of the Day 3 of the Conference. The first 3 birds, Marc, Chris and Charles, quickly realized that we were also the line-up for the Friday morning 8:30-10:00 Session. Dozens more birds came by, but many moved across the room to the 'FOSS4G for Government' BOF (those birds looked quite well fed). In total 9? P-GIS folk perched and during a round of introductions offered contexts to why we were interested in FOSS4G. Working with indigenous communities was a central theme. We also learned that one of our party was a member of the public! How many other BOF sessions had non-map-geeks?! Well, turns out Renee Mason from the Powerhouse Museum, a pretty geeky place, is herself pretty geeky. And she likes maps. So, she was made an honorary member of our flock.

Charles gently encouraged the group to distance ourselves from the Gov folk and off we went to the James Squire Brewpub. Joined by half a dozen others. After that there was much clucking about saving the World by freeing local spatial data.

Here's an image of the group... 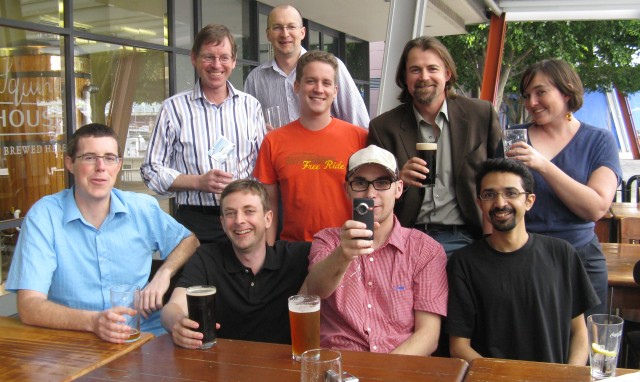 Renee left us with a challenge: can we as a group produce a repository of FOSS4G tools and procedures and recipes and case-studies that could be picked up and quickly put into practice by a small community with little capacity, like an indigenous community for example.

Who likes to Join in Future: