From OSGeo
(Redirected from GvSIG)
Jump to navigation Jump to search 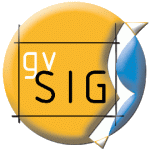 gvSIG is a tool oriented to manage geographic information. It is characterized by a user-friendly interface, with a quick access to the most usual raster and vector formats. In the same view it includes local as well as remote data through a WMS, WCS or WFS source.


It is aimed at users of geographic information, whether professionals or civil servants (city councils, councils, regional councils or ministries) from any part of the world ( at the moment its interface is in Spanish, Valencian, English, Basque, Gallego, Czech, Chinese, French, German, Italian, Romanian, Polish and Portuguese), in addition to being free.


Given its Free Software nature (open source) it is highly interesting for the international community of developers and, in particular, for university settings due to its R&D&I component. In fact, special emphasis has been placed on the expansion of the project so that potential developers can easily expand the functions of the application, as well as develop completely new applications from the libraries used in gvSIG (as long as they comply with the GPL license).

The following 27 pages are in this category, out of 27 total.

The following 18 files are in this category, out of 18 total.